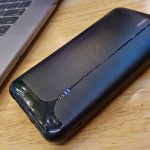 There are hundreds of different sizes and styles of power banks coming out of the market today. Many has its own additional unique features such as wireless charging, more milliamps per hour (mAh), fast charging, more inputs, lithium batteries and so on. But did they prioritize on adding safety features into it, such as stuffing it into your backpack or travel bag resisting high temperatures. Making consumers think that it can probably explode or its unsafe for travel use.

Enter the Joyroom D-QP181 PD Fast Charge Power Bank one of the safest power banks available in the market to date. Let’s check out some of the features that comes with this device.

The D-QP181 is available in black color only with the materials used are PC+ABS or polycarbonate-ABS which is one of the most widely used industrial thermoplastics. It offers superior strength material, flexible and heat resistance commonly used in automotive, electronics and telecommunications applications. It measures at 136 x 74.5 x 17mm and weighs only 195 grams. One thing to notice is the rounded corners of the powerbank that can reduce product wear resulting to getting banged, bent or caught on things.

At the front you have four LED display to indicate the power level of the battery from 25%, 50%, 75% and 100%. On the top you have three charging ports two USB1 output and a Type-C input/output in the middle. At the left side you have Micro USB input port and the Power on/off raised button located at the right side. I find it useful to have two input ports available in this power bank especially if you have two smartphones with different USB port or cables. Plus, with the other ports on it you can charge three devices simultaneously.

SAFE FROM THE INSIDE AND OUT

Now I did mention that this is one of safest powerbank today, Joyroom added some nice safety features with the D-PQ181. First, it uses a new ceramic diaphragm cell the same type as being used by a Tesla car battery and it can be used up to 600 times which makes the high cycling more durable.

On a little technical side, a ceramic diaphragm is located on the surface of existing polyolefin micropore film base material, and single or double is coated with the protective layer that one deck is uniform, made up of ceramic micro particle etc. which forms a porous security functions barrier film. With this material it makes the barrier film high heat-resisting function, effectively reduce inside lithium ion cell short circuit and prevent the battery thermal runaway caused because of internal short-circuit of battery.

The cells can also withstand high temperatures of up to 100-degrees Celsius helping it to cope more complex environment. Meanwhile, the front cover and back cover adds more protection as it is fire-resistant making this power bank from the inside and out safe. They also included a built-in protection from overcharging the battery in case you forgot to unplug it.

You get the Joyroom D-QP181 with a 10,000 mAh battery and has a two-way 18 watts power delivery to further fast charge your device. It is also compatible with Apple and other android devices with fast charge feature.

We tried using it with our Samsung Galaxy Note10 Plus to see its performance using the USB Type-C port. The Note10 Plus has a 43% remaining battery during that time and after 30-minutes of charging it went up to 60% already. We continue to charge it for another 30-minutes which we gained an additional 10% only. So far in just 1 hour of charging we got an additional 27% battery increase which is for me not bad.

The Joyroom D-QP181 10,000mAh Powerbank can be purchased at any Digital Walker store with a suggested retail price of PHP1,990. For a limited-time only, they are giving it at special promo price for only PHP1,490.

If you want it delivered right at your doorstep you can also purchase it via online at the following link: http://bit.ly/JoyroomD-QP181PowerBankShopee.