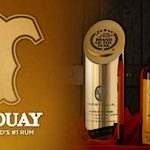 For the fifth consecutive year, Tanduay was declared Brand of the Year in the prestigious World Branding Awards organized by the World Branding Forum (WBF), a global non-profit organization dedicated to advancing branding standards for the good of the branding community as well as consumers.

Tanduay is the only brand in the Alcoholic Spirits – Rum Category from the Philippines to receive the national-tier Brand of the Year Award for the fifth straight year. Its win comes in the heels of another recognition for the company—the World’s Number One Rum that was awarded by Drinks International earlier in the year.

Tanduay posted a 3% increase in product sales in 2018 from 2017, making it the world’s best-selling rum for two years running. According to Drinks International, the Filipino brand sold 20.1 million 9-liter cases in 2018.

In the US, its volume grew by 114% year-on-year, from the first half of 2018 versus the first half of 2017. Tanduay’s various products likewise received numerous awards from the Wine & Spirits Wholesalers of America. Tanduay Double Rum, Tanduay White Rum, and Tanduay Dark Rhum were awarded gold medals, while Tanduay Boracay Cappuccino Flavored Rum received silver medals.

Tanduay is the first Philippine brand to sponsor an NBA team, the Golden State Warriors. It also has naming rights to the Tanduay Club in the Oracle Arena, and Tanduay Rum can be found at retailers in the Golden State Warriors’ blue and gold “Strength in Numbers” collectible boxes in California. It is likewise the official rum of the Barclays Center and the Brooklyn Nets, and has been a Presenting Sponsor of the 40/40 CLUB and an Associate Sponsor of the arena’s Brooklyn Show platform.

In the field of entertainment, Tanduay sponsored the Emmy Awards for two straight years and this 2019, Tanduay entered into a partnership with Octopus Distribution to bring Tanduay to Singapore.

Brand of the Year Award

Tanduay has joined the ranks of many prestigious companies across the globe to be declared Brand of the Year. Other national-tier winners for this year’s World Branding Awards include Nokia (Finland), Van Cleefs & Arpels (France), Allianz (Germany), Ferrari (Italy), Singapore Airlines (Singapore), and Volvo (Sweden), among others.