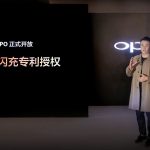 A world-leading smartphone brand, OPPO consistently strives to provide a superior mobile experience to global users through technological innovation. By further expanding the licensing of VOOC Flash Charge, OPPO aims to create a VOOC Flash Charge ecosystem together with its partners, enhance VOOC Flash Charge’s influence in the industry and enable a greater number of consumers to enjoy a more exceptional flash charging experience.

0 0
Previous : ‘Must Haves’ For The Holidays From Philips!
Next : Converge ICT Further Upgrades the Filipino Web Experience by introducing FiberX 1500Plus