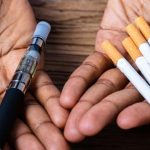 Long-term smokers who switched to vaping were halfway towards achieving the vascular health of a non-smoker within a month, a study has found.

The UK study, recently published by the Royal College of Physicians,  found that e-cigs or vaping are 95% less harmful than cigarette smoking. The research shows that while the use of non-tobacco nicotine products may still involve potential risks, the harm reduction they present have immense potential to prevent death and disability from tobacco use, and may indeed even boost government efforts towards a tobacco-free society.

The study saw a “clear early benefit” in switching from smoking to vaping, in the largest clinical trial to date.

Those who ditched cigarettes and vaped instead saw their blood vessel function increase by around 1.5 percentage points within four weeks compared with those who continued smoking.

The study didn’t claim that this benefit would be sustained, noting that more research is needed to delve into the long-term implications of vaping. It also warned that vaping isn’t safe, merely “less harmful” than smoking.

But it declared that if this improvement were sustained into the long-term, those who switched would have at least a 13 per cent reduced risk of cardiovascular events, such as heart attacks.

Not risk-free but good enough

The UK study is part of the growing material that reinforces the assertion that vaping and puffing e-cigarettes may not be risk-free but frankly, they are far less harmful than smoking.

Unfortunately, this truth tends to get clouded in the heat of media hype against their use, which focuses squarely on vaping and e-cigarettes’ potential drawbacks.

While well-intentioned, and even laudable at discouraging minors from making unhealthy lifestyle choices, such publicity could prove detrimental to millions of smokers who wish to kick the habit, but fail to see vaping as an intelligent nicotine replacement strategy.

Many former smokers who made the switch to non-tobacco nicotine products claim to feeling so much healthier than they did when they were smoking. This is because with e-cigs, they are just puffing mostly nicotine and not the thousands of other harmful chemicals found in tobacco smoke, especially tar or carbon monoxide. For smokers who genuinely want to be healthier, even mere anecdotal claims like these from their smoking buddies are enough to give vaping and e-cigs a second look.

Perhaps the most popular  myth that people believe against the use of e-cigs is that they must be harmful because they contain nicotine. It’s true that nicotine is the reason people become addicted to smoking and indeed, it’s the primary reason why quitters struggle to kick the habit. The bigger truth, however, is that nicotine itself actually carries minimal risk of harm to health.

In a 2018 report commissioned by Public Health England (PHE) on e-cigarettes, researchers found that long-term, moderate use of nicotine has not been found to increase the risk of serious health problems in adults. Even the use of nicotine replacement therapy by pregnant smokers has not been found to increase risk to the fetus.

Another persistent myth is that e-cigarettes can give you ‘popcorn lung’ or bronchiolitis obliterans, a condition characterized by damages to the lungs’ smallest airways. This belief came about because some ingredients used to provide a buttery flavor contain the organic compound diacetyl, which at very high level of exposure could lead to bronchiolitis obliterans – as was the case with people working in popcorn factories, hence the name.

Diacetyl, however, is now a banned ingredient in e-cigarettes in the UK and many other countries. While it’s true that the compound had been detected in some e-cig flavorings in the past, they were at levels hundreds of times lower and as such not deemed to be a major risk factor for the rare disease.

Another prevalent myth that makes people cynical about e-cigs is that, just like with tobacco smoking, exposure to e-cigarette vapor is harmful to bystanders. But nothing could be further from the truth as far as Public Health England is concerned.

In its 2018 report, the agency found no identified health risks of passive vaping to the health of bystanders. E-cig liquid is typically composed of nicotine, propylene glycol and/or glycerin, plus flavorings. Unlike with tobacco use, e-cigs simply do not produce side-stream vapor into the atmosphere, just the exhaled aerosol.

In this age of advanced technological advancement, it’s only normal for people to be skeptical of novelties and new inventions, especially when health is involved such as with vaping and e-cigs. But one thing that should be clear to us by now is that e-cigarettes and tobacco cigarettes are simply not the same. It is vital that smokers are aware of their differences and enabled to make healthier decisions based on complete and accurate information.

Non-tobacco nicotine products carry only a fraction of the risk of smoking and could potentially help an estimated 17 million Filipino smokers quit the habit, or at least lead healthier lives, for their own sake as well as that of their family.

At the very least, vaping and e-cigs should be free of the stigma associated with tobacco smoking.

0 0
Previous : Strengthening the SAFEwash Movement: Safeguard provides PHP 5 million worth of products to schools
Next : Spruce up your home to be staycation-ready with these Shopee finds