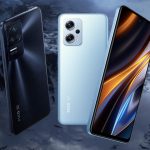 POCO, a popular technology brand among the world’s young techies, announced the global launch of the POCO F4 and POCO X4 GT, the latest devices with best-in-class chipsets that deliver powerful performance while remaining budget-friendly.

POCO F4 offers all the strengths of a flagship smartphone with extremely efficient power consumption. Powered by the Snapdragon® 870 flagship processor, POCO F4 brings to the table the brand’s highest frequency prime core yet.

POCO F4 will be available for purchase at an early bird price of P16,990, and P18,990 respectively via leading e-commerce platforms.

Meanwhile, the POCO X4 GT is an affordable performance speedster optimized for efficient and smoother performance in all aspects of gaming and entertainment. It is equipped with the MediaTek Dimensity 8100 chipset, giving users best-in-class power efficiency while reaching new heights in flagship processor performance.

POCO X4 GT will be available for purchase at an early bird price of P15,990, and P17,990 respectively via leading e-commerce platforms.

POCO F4: Extremely Powerful with All the Strengths

The device boasts a 6.67″ E4 AMOLED screen and an ultra-tiny 2.76mm DotDisplay, one of the tiniest in the industry. It features 120Hz refresh rate, 360Hz touch sampling rate for lower response latency and with screen peak brightness of 1,300 nits. Dual speakers, verified with Dolby Atmos, add to the immersive experience by delivering dynamic and crystal-clear sound.

POCO F4 comes with a 4,500mAh (typ) battery and 67W turbo charging, taking only 38 minutes to charge up to 100%. With a fully charged battery, it offers strength in duration with up to 10 hours of gaming, 21 hours of video playback and 119 hours of music playback. The device utilizes Middle Middle Tab (MMT) technology, a method of fast charging that circuits electric currents into two split directions for improved charging speed and stability, sustaining highest level performance stretched over longer periods of time.

POCO X4 GT charges its 5,080mAh (typ) high-density battery quickly and safely with 67W turbo charging, powering up to a 100% charge in just 46 minutes. In a 6-min wash-up, it can be charged up to 25%, and after a 30-min workout it will juice you up to 85%. Aided by Middle Middle Tab (MMT) technology, it enables you to game for more than 90 minutes with just 10 minutes of charging.

Featuring a 64MP main camera, 8MP ultra-wide camera, and 2MP macro camera, photos capture every detail, near or far. And for high-quality selfies, the 16MP front camera has users well-covered. Coming with 19 stellar vlog templates pre-installed, as well as the Drafts function, users will be able to film and edit quality content from the get go.

Users can enjoy the premium after-sales service, which offers one-time free screen repair service during the first 6 months after purchase.