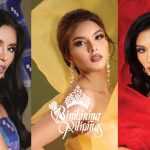 This year’s Binibining Pilipinas is shaping up to be one of the most anticipated in recent years. The excitement is just about to reach fever pitch as the 34 candidates parade their national costumes and swimsuits virtually.

Ten candidates with the most votes will be announced during the National Costume Fashion Show to be streamed on YouTube and Facebook on June 27. Then, another round of voting will be opened to decide who among the Top 10 qualifiers will win Best in National Costume on the pageant’s grand coronation night.

Also, the candidates of Binibining Pilipinas will get a chance to flaunt their catwalks in swimwear provided by Domz Ramos at the virtual swimsuit presentation. They will be joined by the 2019 Binibini queens and Miss Grand International 2020 First Runner-Up Samantha Bernardo. Watch the event on June 18 on the YouTube and Facebook accounts of Binibining Pilipinas.

“We are so excited that we can bring this year’s Binibining Pilipinas pageant closer to our fans,” Binibining Pilipinas Charities Inc. (BPCI) head Gines Enriquez said. “By doing some parts of the competition online, fans will have a front row seat as their favorite candidates prove themselves worthy of the crown. They can also take part by voting, and who knows, with their support, they can bring their favored candidates to the front of the pack.”

The coronation night of Binibining Pilipinas 2021 will take place on July 11 at the Smart Araneta Coliseum. The event is set to make herstory as Miss Universe 2018 Catriona Gray and Miss Grand International 2016 First Runner-Up Nicole Cordoves will be the first all-female tandem to host the pageant’s finale.

“This year’s candidates are some of the most promising young women in the country. We know that any one of them will be worthy to raise the flag of our country and represent us Filipinos on the global stage,” Irene Jose, COO of Uniprom Inc. and BPCI board member, said.

0 0
Previous : Commemorating 50 Years of Email and How to Keep Your Email Secure
Next : Six Fan Favorite Moments during Shopee’s 6.6-7.7 Mid-Year Sale TV Special