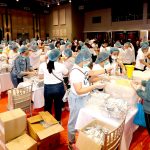 Ayala Multi-Purpose Cooperative (Ayala Coop) kicks off its “Be Juan Para sa Kalusugan” inititative which seeks to provide nutritious fortified rice meals for hundreds of children in Pampanga and Bataan.

The fortified rice will help feed 490 Grades 3-6 children from seven barangays in the City of San Fernando, Pampanga and some 300 school children from Bagac Elementary School, in the province of Bataan over a period of six months.

Said Ruel Maranan, vice chair of the Ayala Coop and president of Ayala Foundation: “Ayala has long been committed to contributing to national development. Through our business and social development initiatives, we continue to address existing and emerging needs of Filipinos, while also helping improve the lives of people and communities. Be Juan Para sa Kalusugan signifies our recognition of an important concern in the country—health and nutrition. Investing in nutrition is one way of investing in our people and their future.”