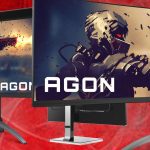 AOC is still the number one PC Monitor brand in the Philippines. According to the International Data Corporation (IDC), the world’s premiere global marketing intelligence firm, AOC ranked #1 in the PC monitor market in terms of unit shipments in the Philippines for the third quarter of 2020. AOC’s consistent performance, as well as its commitment to continuously improve allowed it to remain on top for two quarters straight.

This distinction isn’t new for AOC Monitor, and the brand’s consistency proves to be one its users can depend on. Consumers know that AOC Monitor will always be a great choice, and its users rarely change to another brand once they’ve used AOC Monitor. The continuous innovation that adds more features to the products AOC offers further cements their position as a leading brand in the industry.

One of the most exciting new products AOC Monitor brought to market during the Q3 period is the AG493UCX, the 49” curved gaming monitor with dual QHD resolution and 120Hz refresh rate. It’s the widest screen for the brand to date, which just further pushes the envelope on what AOC Monitor can offer to consumers. In addition to this, gamers can now express themselves fully with the release of the pink version of the AOC AG273FXR.

To further demonstrate the quality of AOC Monitor, it supports local esports tournaments and bring a competitive edge to the esports athletes who use their monitors. Having been involved in many esports events in the past few years, AOC Monitor has become the monitor of choice for many esports practitioners and fans.

As part of a broader tournament encompassing the whole of the Asia-Pacific region, AOC Monitor held the AOC Masters Valorant Cup Philippine Qualifiers. Valorant, developed and published by Riot Games, is a new multiplayer team-based First-Person Shooter (FPS) that has attracted the attention of countless players around the world. Within just a few months, Valorant has already established itself as a big player in esports.  For the AOC Masters Valorant Cup Philippine Qualifiers, Bren Esports and TMT (now ArkAngel) emerged victorious in the Philippine qualifiers.

Buy these models to our authorized resellers nationwide see below lists. For models Q27G2S, C27G2ZE and CU34G2X these are exclusive at DynaQuest only.

While consistently #1 in the market, AOC Monitor will continue finding ways to improve their product lines. They want to bring the best experience for consumers, and it has become AOC Monitor’s goal to improve the entertainment lifestyle of everyone who uses their products. Being number 1 will not stop them from delivering its promise of visually stunning displays. Instead, it serves as motivation to do even better.